Juggling caring responsibilities with employment is sometimes too much. Employees too often decide they can’t do both and leave the workplace. But that’s not saying anything new, says Pamela Holmes, Practice Development Manager at the Social Care Institute for Excellence (SCIE). What is surprising is just how few hours of caring it takes to tip someone from being an employee into leaving work altogether.

A new report from Age UK and Carers UK, Walking the Tightrope finds that more than ten hours caring per week can stretch to breaking point an older worker’s ability to remain in employment. And those caring for even five hours a week tend to pass up opportunities for promotion or overtime with a knock-on effect on retirement income and savings. ‘Doing the right thing’ can undermine a worker’s financial security.

The impact of caring is not felt equally across all socio-economic groups. Those in higher skilled occupations such as managerial or professional roles are often more likely to be able to make smaller reductions in their working hours than those in lower skilled groups. But the lack of affordable quality social care options, inflexible employers and poor work practices can drive carers out of employment.

Older workers are most likely to be carers and to be providing more hours of care, and they face particular difficulties.  The evidence indicates that the more hours of caring that are undertaken, the greater the impact on employment.

This new focus group research also highlights the profoundly negative psychological and emotional effects of withdrawing from the workplace.  It found many older carers experience increased feelings of loneliness and isolation following withdrawal from paid employment. 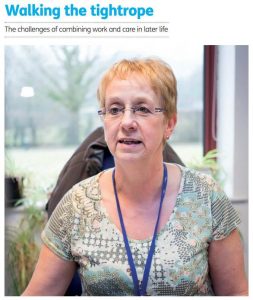 The Age UK/Carers UK report estimates that carers leaving employment is a substantial drain on the public purse; almost £1.3 billion a year when the costs of Carer’s Allowance and lost tax revenues on foregone incomes are taken into account. Enabling people to successfully combine work with caring makes sense on an individual level, but the business case is also compelling.

The report estimates that supporting carers to stay in work could add an additional £5.3 billion a year to the economy. Employers also lose out if talented and experienced employees leave work prematurely or are less able to do their job because of the demands on them.

What can be done to support those with caring responsibilities to remain in work?  The Carers in Employment (CIE) project, funded by the Department of Health, Department of Work and Pensions and the Equalities Unit is looking for answers.

This two-year learning and development programme which started in April 2015 is managed by SCIE. Pilots are funded to explore the different ways this challenge can be met. So far activity falls into three broad areas: engagement and awareness with employers, information and advice to carers, and assistive technology; working carers of all ages are included.

Looking to the future, it’s clear that society will need to support more people to successfully combine work and care in later life. We also need to avoid unnecessary and unsustainable shortfalls in the number of workers and carers.  The CIE programme is being evaluated by the Institute of Employment Studies to ascertain what works to support carers to remain in or to return to work. It reports in 2017.