"I have met many parents who have lost a child to suicide," explains Louis Appleby, Professor of Psychiatry at the University of Manchester and Chair of the National Suicide Prevention Strategy Advisory Group. "They are looking for explanations, they often want to help protect other young people, they are dealing with profound distress and sometimes anger or guilt. They use the same word to encapsulate their feelings: devastated."

Suicide by young people is uncommon, in statistical terms at least. Under 20s have the lowest suicide rate of any age group, though it still translates into 182 lives lost in England in 2015, 182 devastated families. Overall, suicide rates in teenagers are no higher than 15 years ago. The latest statistical release on suicide is available here.

Yet there has been a stream of reports raising concerns over the mental health of young people and suggesting that suicidal thoughts are becoming dramatically more common in teenagers. We have to be careful in interpreting these findings – they are often based on online surveys or calls to helplines. They show how willing people are to tell us how they are feeling, and if we encourage people to talk about their mental health, as anti-stigma campaigns do, we shouldn’t be surprised if figures like these go up.

But academic studies and official statistics are beginning to say something similar.  Self-harm appears to be rising and in 2015 the suicide rate in 15-19 year olds rose for the third successive year (see the ONS data here). The concern is that today's young people are increasingly viewing self-harm as a way of responding to life stresses and that a long-term pattern is being established.

The theme of this year’s World Suicide Prevention Day is “connect, communicate, care” and it seems especially relevant to suicide prevention for young people.  Why does suicide risk rise rapidly in the late teens? How, as parents and professionals, can we understand better the stresses that young people face? How do we encourage them to tell someone who can help? 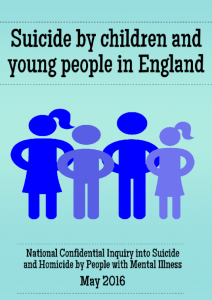 A few months ago, my research group published the first findings from a national study of teenage suicide. There were several common themes including exam pressures, physical conditions such as acne and asthma, bullying and bereavement, especially by suicide.  23 percent had used the internet in a way that was related to suicide, searching for methods or posting messages on social media.  43 percent were not in contact with any specialist service – mental health, social care or youth justice.  Over half had previously self-harmed.

Several of these themes are common in young people - most will not become suicidal.  But for a few, the stress is serious and the risk is real.  We shouldn't over-react to teenage distress but we shouldn’t dismiss it as transient or trivial.  Our aim should be to help young people go beyond talking – to develop the mental health strengths to cope with the adversity they will inevitably meet and the confidence to ask for the help they will sometimes need.